The Kasbah of Telouet is located between the cities of Marrakesh and Ouarzazate, exactly at 1,650 meters of altitude. In this hidden place, we can find one of the most interesting Kasbahs in our route. Built in 1860, it was owned by El Glaoui family. Thami El Glaoui, who is also known as “The Lord of the Atlas”, was the Pasha of Marrakech between the years 1912 and 1956. There use to tell many stories about this character. Some consider him a ruthless warrior, and some others assure he was a good person, but there is no doubt that he played an important role during French colonialism.

This Kasbah, together with another of its properties in Ouarzazate, The Kasbah of Taourirt, are two of our main stops on the Route of the Kasbahs.
The Ksar, or set of Kasbahs, is built in an strategic positions, to have control over the area. Let’s not forget that the socio-political structure of this society was similar the feudal lords one during the Middle Ages in Europe. From these Ksar or fortified cities, control was exercised over the rights of the caravans, which transited between the countries of southern Africa and the cities of northern Morocco.
In the Kasbah of Telouet, we can admire ceilings and walls of polychrome stucco and cedar, ceramic tiles, grilles and lattices in the windows, as well as tiles and skylights. We will also discover their heating systems, their way of life, and we will reveal some of their secrets, such as what four prestigious generals were there during the Second World War, or why their access door has a smaller door integrated.
We will also have the possibility to visit in the vicinity the origin of one of its most prestigious merchandise. Join us without any hesitate, we will be glad to have you! But please, try to plan your trip with some time, due to the influx of visitors. 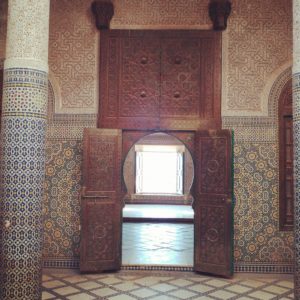